Our courses at Kings run on the following dates over Autumn half term, February half term, the Easter holidays & May half term:

King’s College School in Wimbledon, South West London is a selective independent day school for pupils of high academic abilities. The school was founded as the junior department of King’s College London and occupied part of its premises in Strand, before relocating to Wimbledon in 1897. The school occupies nearly 20 acres on the south side of Wimbledon , with excellent classroom and teaching facilities.

At King’s, we do not offer meals and recommend students either bring a packed lunch or buy something locally – there is a good array of options on the doorstep including, restaurants, delis and sandwich shops. There is a small snack shop onsite selling sweets, drinks and savoury snacks. 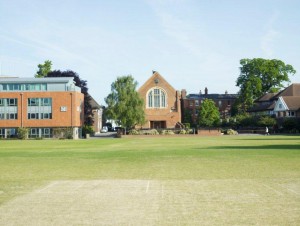 HOW TO FIND US

There are excellent train, tube, bus and tram connections to the school, both with central London and the surrounding area.

The Tramlink provides an excellent service between Wimbledon Station and Croydon. Daytime Mon – Sat trams run every 7-10 minutes; every 15 minutes at other times. The Tramlink extends to Beckenham, Elmers End and New Addington.

Coming west/south from the M25 join the A3. Ignore the A298 sign to Wimbledon – continue until the Coombe Lane exit (for Merton/Kingston), as if for the petrol station. Take the slip road going left behind the petrol station (signposted Wimbledon), and turn left at the bridge at the top. Continue over a zebra crossing, then at the mini-roundabout turn left (signposted Wimbledon Village). You are now on Copse Hill. Continue until you reach a double mini-roundabout – turn left into Woodhayes Road. As this climbs towards Wimbledon Common you will see KCS on your right.

From the North, leave the A3 at the Tibbet’s Corner roundabout and take the road signposted Wimbledon. Follow this road for a mile and a half, then turn right into Cannizaro Road. Follow this road for 600 yards – it becomes West Side Common – and you will see the main entrance to KCS on your left.

There is parking in the side roads near the school.